Even though we are almost three months past the Boston Marathon, we don’t forget the experience and neither do the fans or the runners. Fans from around the country continue to contact us after they find our fruit in stores and tell us how much they love it and that they had tried it in Boston. And just the other day, one Boston fan shared with us that June 30th should be declared Rainier Day in Boston after he shared our cherries with his co-workers and everyone delighted in their fresh amazing flavor.

It’s that enthusiasm for healthy food and healthy living that lead us to Boston to this storied race and continues to help us connect with active lifestyle enthusiasts around the country. But it’s the words from one of our runners that best summed up the Boston experience in his own words…here’s Nick.

“The Boston Marathon Experience was simply amazing for me.  I’ve participated in a number of races in the past, but this one left an impression that will last a lifetime.

The flight from the Bay Area to Boston kicked off the experience.  You could tell that most people on the flight were either participating or spectating (what I like to call ‘spectatheletes’). The energy was high, but devoid of the anxious energy you often feel before races. I met up with other Rainier runners Mike and Crystal at the airport, and we talked about our training, and how much we were looking forward to the event itself. When we arrived in Boston, the city was abuzz with enthusiasm for the event.

One of the first things we did when we arrived was to attend the premiere of BOSTON: The Documentary.   I had heard some of the more memorable stories of the race in the past, but the documentary really drove home just how monumental the race was and how essential it is to the culture and spirit of Boston. All of the stories were engaging, but the one that stood out the most was that of Stylianos Kyriakides, the Greek runner who ran the 50th edition of the race. His homeland was stricken with famine, and he was instructed by doctors that he was too weak to run. However, he was determined to use the race as a platform to call attention to his war torn country, and not only did he compete, but he won. That is the spirit that is the Boston Marathon.

The next day, I went to the expo to get the bib and race materials, and the energy was infectious. I was blown away by the sheer volume of people there, and humbled by the strong looking, elite runners. After packet pickup, I met up with the rest of the Rainier runners, and we had a great time hamming it up for the cameras, and sharing more stories about training, Boston, and life in general.  It was a really cool group, that I was proud to be a part of. 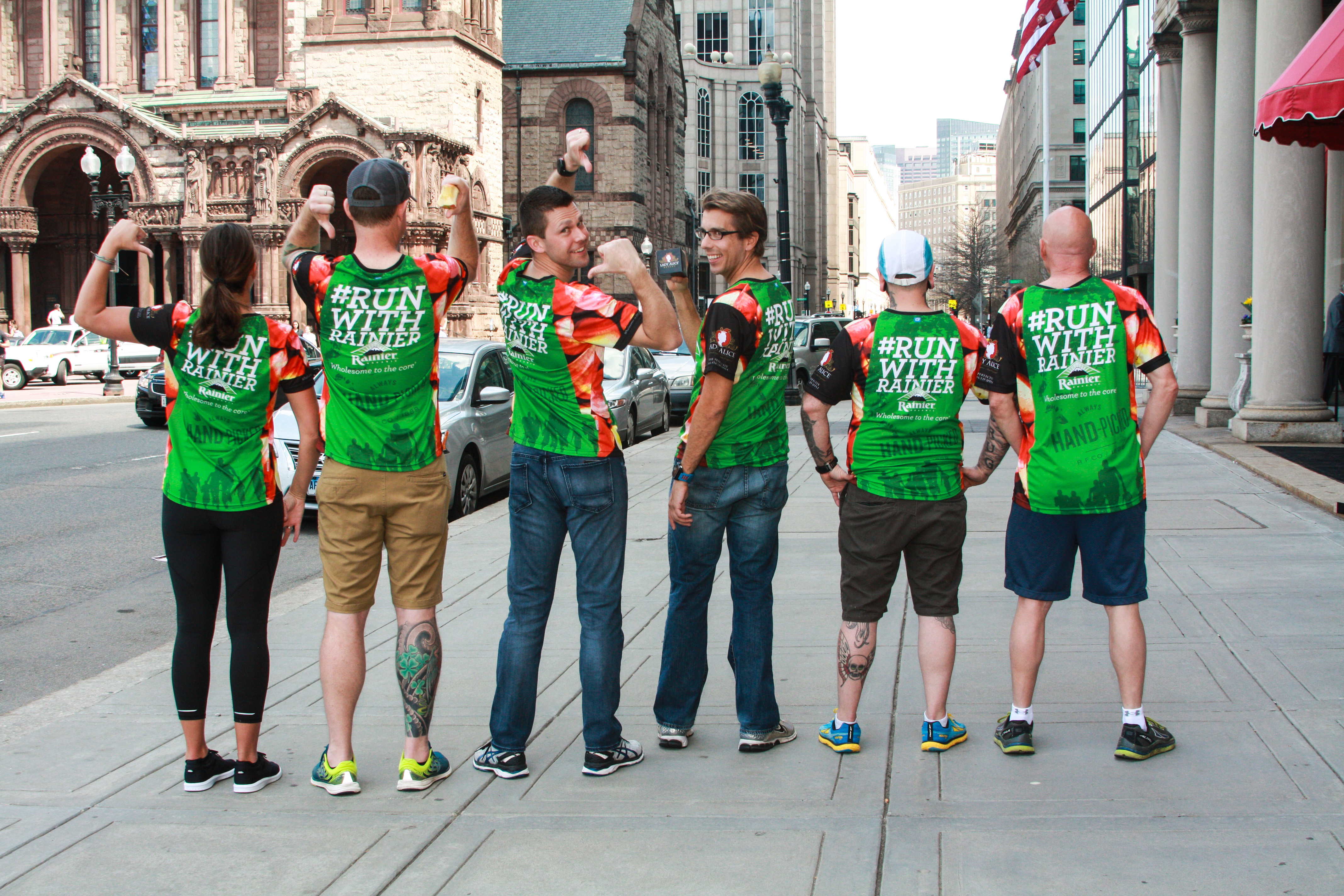 Race day arrived and we boarded the shuttle to Hopkinton a couple of hours before our wave was set to take off. On the bus ride over, I kept thinking “Wow, this is a long way.” As we passed each exit, my excitement, and anticipation grew. “Am I really going to run this far?” When we passed Wellesley, I couldn’t believe we were only about halfway. I decided to chat with some of my fellow racers to get my mind off the task ahead.

We arrived in Hopkinton, and waited as the earlier waves departed.  Suddenly, it was time to line up for the race.  The number of runners was incredible.  As we walked from the school to the start line, the cheers of the crowd became audible, until it became a constant roar of support.

As the race started, there were so many runners that the pace was a slow jog for the first couple of miles, until the pack thinned out.  Just past the starting line, I saw my girlfriend Katie for the first time.  She gave me a huge cheer of support, and I sped up a little thanks to her encouragement.  We passed from town to town, past each mile and 5K marker.  As we passed through Newton, I saw my co-workers Erik and Travis cheering, as well as my girlfriend Katie once again.  I had heard much about the toils of “Heartbreak Hill,” the last of the 4 Newton Hills that came unforgivingly at mile 20.5 of the race. I was determined to make it to the top without walking, which I was able to do, albeit at a slow pace.  After I crested the hill, I thought that the hard part was behind me. Boy, was I wrong! The downhill side of the Hill was exceptionally painful for me. Each stride and impact brought major pain to my quads, and as I passed the mile 21 marker, for the first time in the race, I walked. I realized I had 5 more miles to go. 5 miles I thought, c’mon, that’s nothing! How many times have you ran 5 miles?? Let’s do this!

I pushed along, but continued to take walking breaks.  I saw my overall pace slow about 2 minutes per mile. I was disappointed that I slowed down, but it gave me the opportunity to take it all in.  I passed by Boston College, then Fenway, and finally, to the final turn on Boylston Street where I saw Katie once again.  I learned later that Katie had walked/ran over a half marathon herself that day, going to incredible lengths to support me all over the course.  I am seriously a lucky guy to have her in my life, and this was just another example.

As I approached the finish line, I felt like I was part of the magic and history of the race, and I became overwhelmed by emotion and gratitude.  I finished in about twice as much time as the winner had, but the crowd cheered me on like I was in first place.

The race itself was simply incredible. Literally all 26.2 miles were lined with crowds of people.  It was unlike any race I have ever seen.  The support of the crowds carried me through the race, especially during my lowest moments. The community and the event are intertwined on levels I couldn’t have appreciated without experiencing first hand. 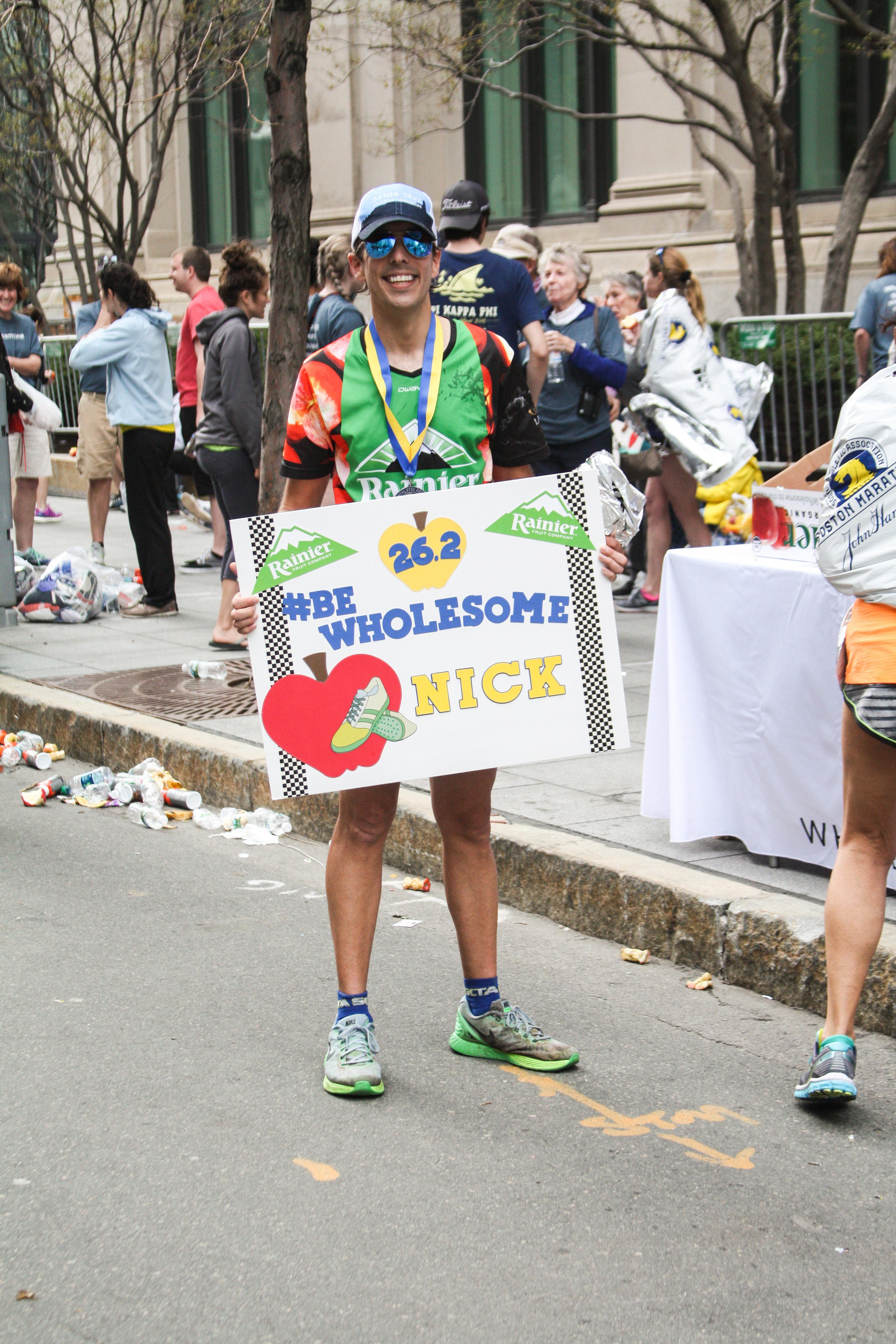 After the race, I visited the Rainier booth, where they treated me like a rockstar.  I was having trouble walking at this point, so Aaron, Andy, Pete, and the gang helped me sit down, and brought me a Lady Alice apple to enjoy.  After all the gels and sports drink from the race, the natural flavor and real food was perfect. Moments later, Katie emerged, and despite my grimy appearance, gave me a huge hug.  The rest of the Rainier runners gathered as they too finished the race, and we basked in the energy, and accomplishment of what we had just done. 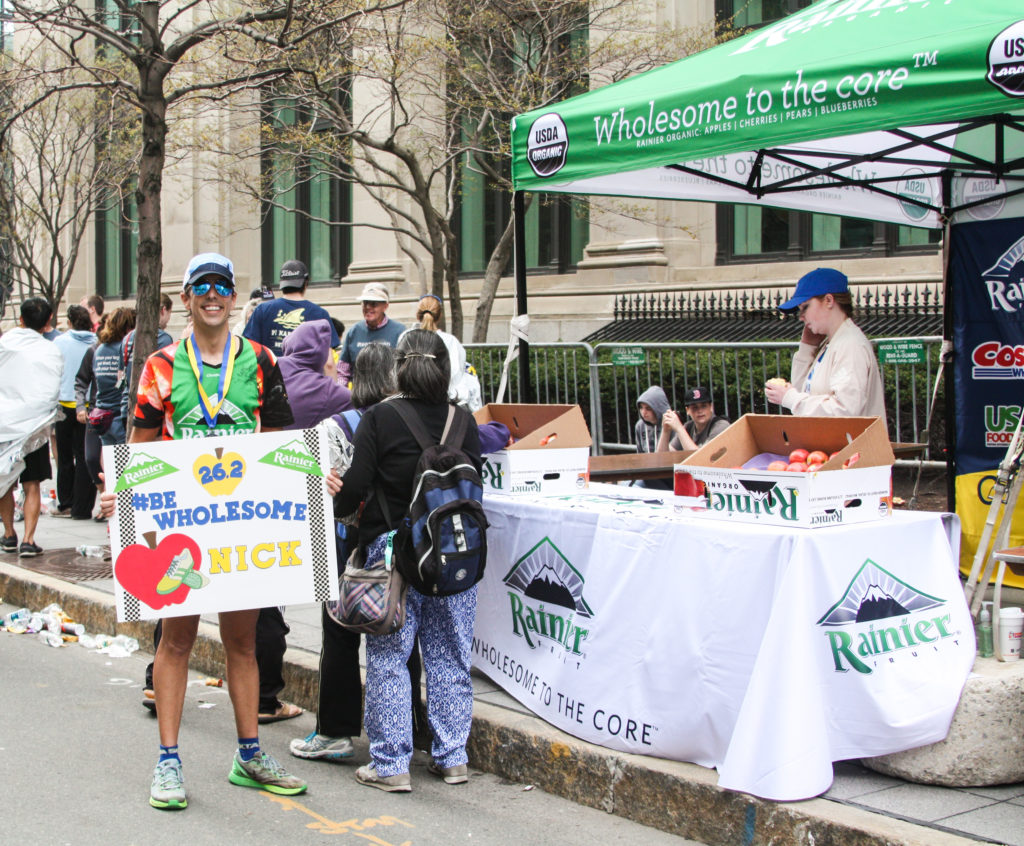 After some pizza and beer, Katie and I later walked over to Fenway to take part in the after party. I can’t claim to be a Red Sox fan (go Giants!!), but the stadium was incredible, especially after having seen it on TV so many times.  We were able to walk onto the field, and walk around the warming track.  We even enjoyed a Samuel Adams 26.2 lager, as we took in the evening. The experience was unforgettable and I am so grateful for it.”

Thanks to Nick, we are able to live his experience through his eyes. Over the course of several days, we meet thousands of runners and as Nick calls them ‘spectathletes’, and we feel their energy and excitement. Our staff is on the course cheering on runners and at the finish line providing apples to the finishers, but the first-hand experience of the runners is unrivaled.

Once again, congratulations to every athlete that sets a goal and works to complete it. Whether it’s the Boston Marathon or your first loop around the block, we’re here to help you celebrate finish lines, not finish times. That’s what it’s about when you live Wholesome to the Core. We can’t wait to see everyone in Boston again next year.