PERSONAL REFLECTIONS on a Special Year from the 2017 Boston Marathon

Over the past year, we’ve been sharing feedback and motivation with you from running legend and long-time Boston Race Director Dave McGillivray. During the last year we’ve gotten to know Dave, we’ve learned about his big heart, his dedication, his iron will and more. Dave is a model for a life lived well, for goals set, for limits broken. He represents not only the best of his sport, but the best of himself as he lives true to the values we hold dear; of living Wholesome to the Core. It’s only fitting that we should have Dave share with you, in his own words, his reflections from this year’s Boston Marathon.

A Letter from Dave:

This year’s Boston Marathon was a special year for me – my 45th year running the Boston marathon, running and fundraising for the Martin Richard Foundation, my 30th year directing the race, the release of the documentary “Boston”, but most importantly sharing the experience with my son Max who was running his very first marathon.  That is special for any parent to witness, particularly special for a parent like me whose life work has been running.

Like every year, it was a busy week with all the final meetings and appearances – Organizing Committee, Public Safety, Elite Athletes, Wheelchair Athletes, Special Fluids, going to Joan Samuelson Day in Boston, speaking at the Dana-Farber Marathon Team pasta dinner, Hopkinton Marathon Committee, Bell Belichick Team party, Charity Teams party, press conferences, etc., etc.  Add to that all the appearances at the expo and other places around town and I was busy.  There was absolutely no down time the entire week.  Not the wisest way to rest up to both direct and to run a marathon – like always, I broke ALL the rules.

I must say, one of the emotional highlights of the weekend was the premiere of the documentary “Boston” on Saturday night at the Wang Center with almost 3,000 people in attendance.  It was thrilling to watch 120 years of history flash across the screen in just two hours and relive some of the greatest moments of this storied event. 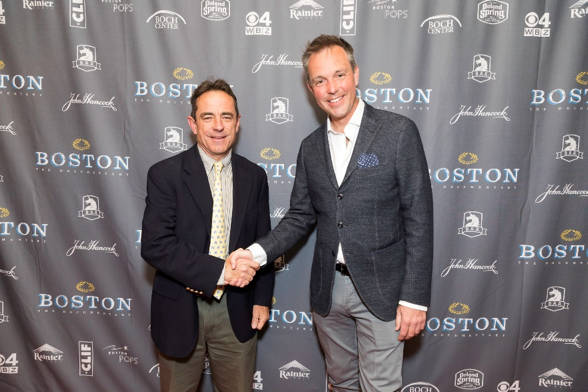 And, of course, running for MR8 was special once again, not just for its special place in the marathon and Boston, but also because my son, Max, was also running for them.  Together we raised close to $90,000 to support the foundation for which we are both very proud of and more importantly, thankful to all friends and family members who supported us. But more importantly, the entire MR8 team raised almost $1 million dollar – whoa!!!! 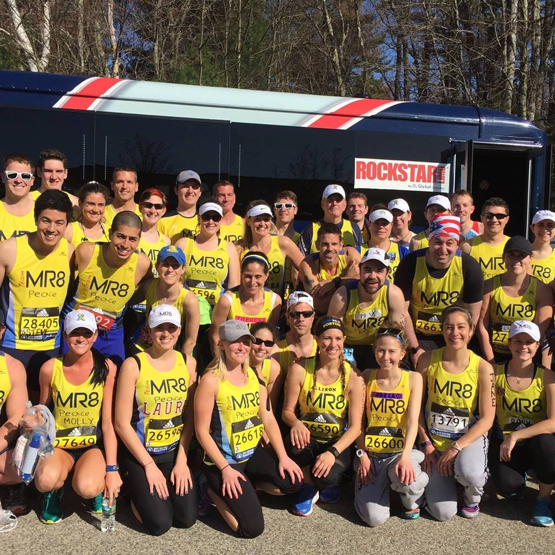 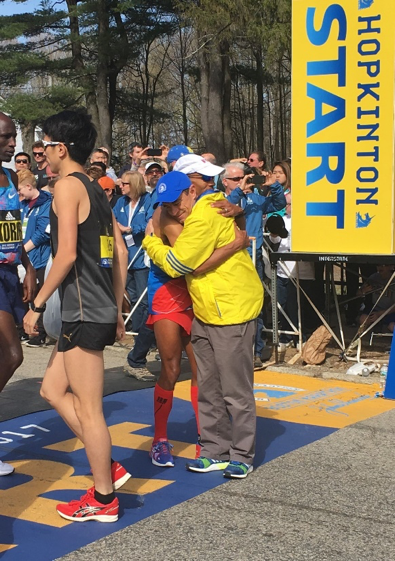 A hug from Meb at the start line

The race went great. I think it was the best we could ever hope for and that we have ever achieved. It did get a little hot (60-70 degrees) for the runners but our medical team was right there when needed. 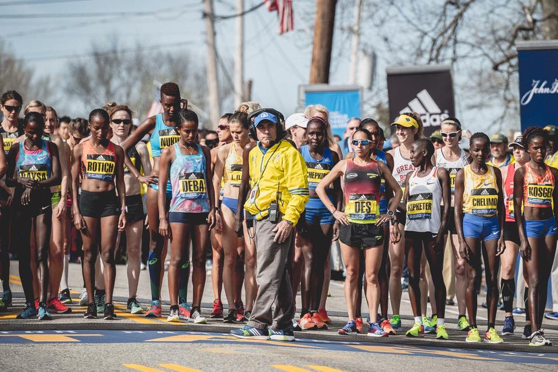 At 2:49pm, we had a moment of silence at the finish line in memory of the 2013 tragedy.  Immediately following the silence, Tom Grilk, CEO of the BAA asked the crowd to cheer and they erupted into the loudest applause I think I have ever heard from a crowd that size. After it was over I thought, why did that happen? In addition to cheering for the runners, they were cheering because we have recovered and we have not let evil interrupt goodness. It was clear the crowd needed this, they needed to express themselves, they needed to be heard in celebration, not sadness.  This has been pent up in them for four years and it seemed to all come out at precisely 2:50pm. It was a statement – we are back, we are all back, you will not silence us and when you try, we will rise.

At about 3pm, my son Max was making his way down Boylston Street about to finish his very first Boston Marathon.  I went up on the announcer’s platform, grabbed the microphone and personally announced him crossing the finish line…wow…wow…wow. What an exciting moment in my life and career – being a Dad and seeing your kids succeed is always a powerful moment.

Also finishing was the inspirational team of Bobby Carpenter and Denna Laing both former professional hockey players.  Denna incurred a spinal cord injury a few years ago.  Bobby pushed her in the race and I awarded both of them their finisher medals! It’s these stories of perseverance that always get me. 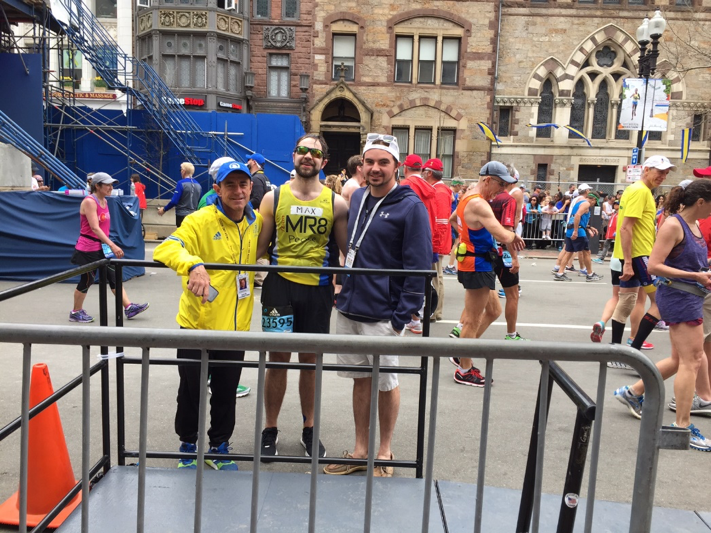 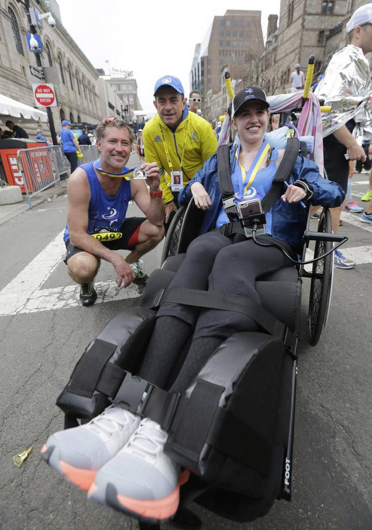 As for my run later in the day, I had six folks join me this year – Matt Auger from Cape Cod, Brian Metzler and Casey Blaine from Colorado, Charlie Romanello from California, Jason Todd from Virginia and Brent Richardson from New Hampshire.  We were once again joined by our experienced crew of my brother Bob McGillivray (aka, BMac) and Ron Kramer, along with a few State Troopers. 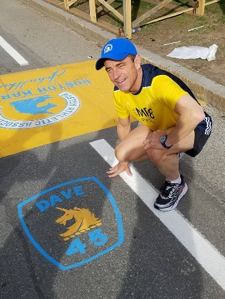 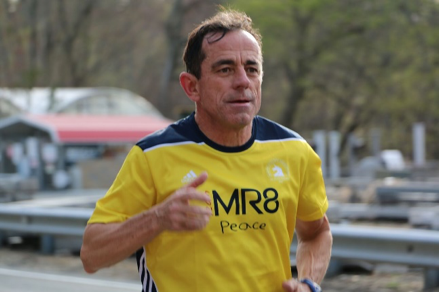 I felt I was in pretty good shape going in, I had done a lot of work in previous 3-4 weeks.  I actually ran 4 marathons and 3 half marathons in 7 days only 3 weeks ago as part of my training for the World Marathon Challenge (7 marathons in 7 days on 7 continents).  However, I was hoping that I didn’t overdo it – you think?

Thank goodness all went very well, no issues.  I was emotionally and mentally more tired than physically tired when we started off.  I actually got stronger the further we went along…go figure.  I was hoping to run a 4:15 and voila, we ran a 4:15.  We actually ran a faster pace than that but with all the stops along the way, this ended up being our overall time.

Another highlight was seeing my family when I crossed the finish line with Elle, Luke, my sister, Susan and Max holding the break tape.  It was the first time they had been back to the finish since 2013 and it was a special moment.  Also at the finish were Olympians Joan Samuelson and Deena Kastor.  That was so nice that they came back to the finish to welcome us across.  I finished at 9:10pm – last again!  Who cares. 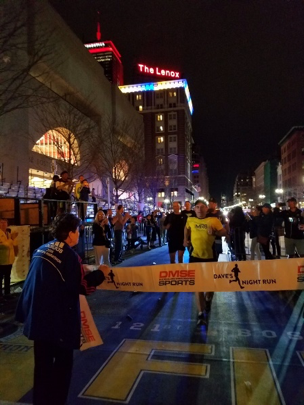 Break tape at the finish line 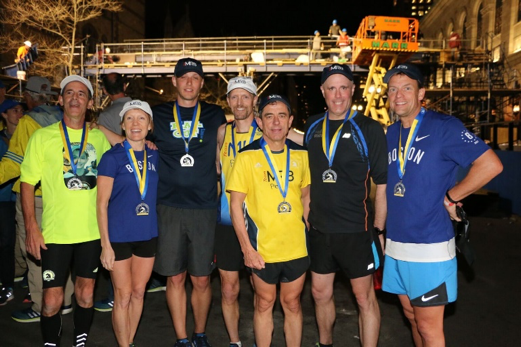 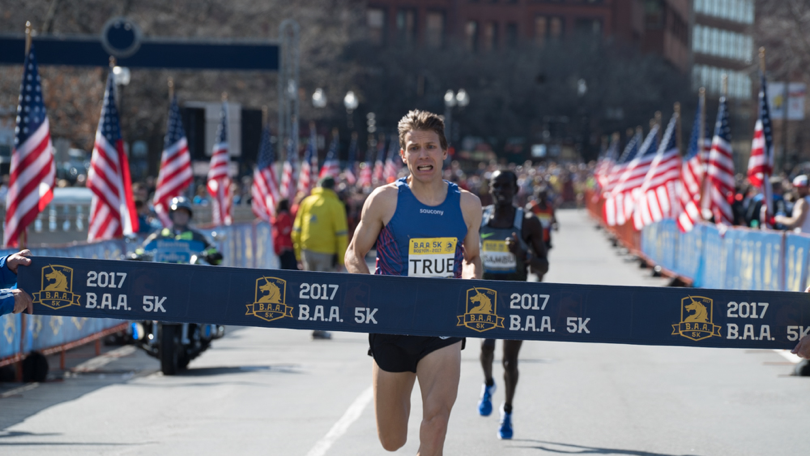 It was indeed a really good weekend all around…but I’m glad it is all over for another year!  I am privileged to play a small role in all of it and continue as its caretaker.

PS…for those of you that want to read more, here are a few cool stories that emerged from this year’s Boston Marathon prep. This will give you a sneak peek into what I’m thinking and what I do. 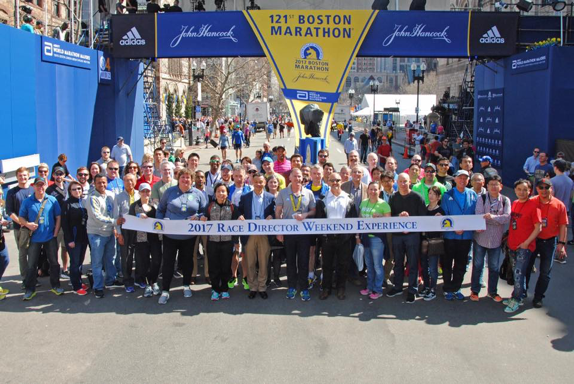 Race directors from around the world 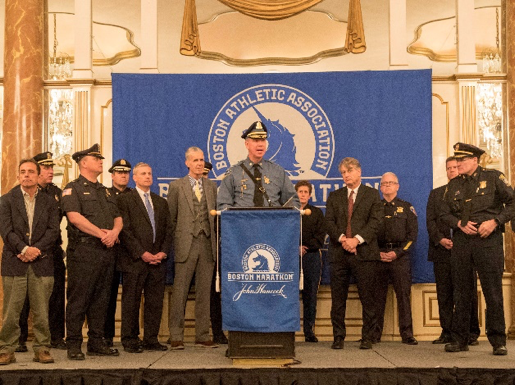