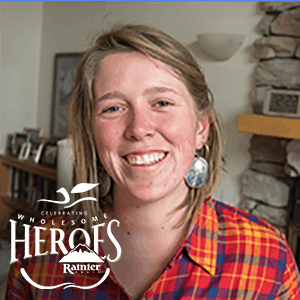 Kitty Bolte is an environmental hero. Growing up in California, Kitty worked on farms as a teenager, caring immensely about the natural world and its diversity. Her love of agriculture has helped with her work in interesting, fast paced and problem solving environments.

Since 2017, Kitty has worked for the Xerces Society, a California based non-profit environmental organization that focuses on the conservation of invertebrates. She and her colleagues work to protect invertebrates and pollinators that contribute to the survival of wildlife, the pollination of crops, and the health of our environment. She is revolutionizing the way farmers protect insects and help their environments flourish. 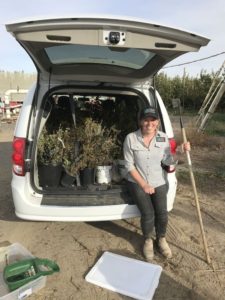 Before joining Xerces, Kitty worked as a researcher on almond systems in California, learning how California’s almond growers can leverage bee populations to benefit their crops, and the environment. “It was interesting to see what a profound impact insects and other invertebrates can have. They’re really part of the foundation of an eco-system.”

Now, working with Xerces, Kitty is part of the largest pollinator conservation program in the world. Recently, they’ve expanded their reach to Washington to partner with Rainier Fruit and other apple growers to help develop and implement pollinator conservation programs. At Rainier, Kitty has been instrumental in the planning and installation of increased pollinator habitats like meadows, wildflower plantings, and hedgerows at the borders of orchards. “These habitats not only provide increased shelter for beneficial insects, they also diversify their diets by providing additional types of pollen. When bees are living exclusively off of one type of pollen, like apple pollen, it can make their colony more vulnerable.”

With an educational background in plant ecology and restoration, Kitty didn’t foresee working with insects and invertebrate conservation. Her passion for this project with Rainier comes from her knowledge of how agriculture directly relates to conservation, which involves pest control and pollination. “It’s wonderful to see more growers embracing natural pest control through the use of beneficial insects like lacewings and ladybugs.” Kitty explains, “They are instrumental in organic orchards, and even in conventional growing practices can really reduce pesticide application.” 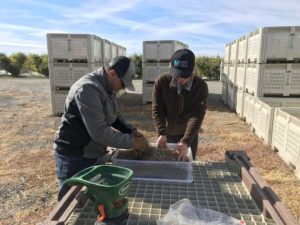 Kitty loves to see the connections that can be made through her work. While planting a pollinator habitat in Colusa County California, she was working with a crew of farm workers. “The workers were very excited and engaged to learn about the milkweed they were planting because it is the larval host for monarch butterflies, which migrate north from Mexico and the Central Coast of CA all the way to Eastern Washington,” Kitty explains. These workers were all from the part of Mexico where monarchs spend the winter months, which is often an incredible sight. When the monarchs overwinter, there can be up to 15,000 butterflies clustered together on just a single tree branch. Kitty was pleased to see such an exciting and meaningful connection between her work and something that reminded these workers of their home.

Insect pollinators are responsible and necessary for over 85% of our world’s flowering plants, which includes two-thirds of the earth’s crop species. “I see it as a matter of intrinsic value—,” she says, “it’s the ethical thing to do and important for the beauty of nature.” When working to establish a pollinator habitat, like she has at Rainier, Kitty says there are several things to consider. “You’ve got to consider whether there will be enough bees to pollinate the orchard, food and nesting resources, conservational bio control,” she explains, “and there’s also the weather conditions for the year, which may affect which types of insects are willing to fly under bad weather situations.”

Minimizing pesticides is another critical aspect of the Xerces Society’s work. “The purchase and release of certain invertebrates – we refer to them as beneficials – can in turn reduce and control other pest populations. It is a balancing act that can help to reduce the necessity of pesticides in orchards.” 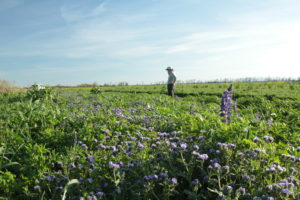 Since expanding Xerces’ work from California to Washington, Kitty says there is a lot more to learn. “We need to redefine the way we do things,” Kitty states. “Right now, we have a pilot program in place in several apple orchards, but we need to keep expanding the grounds where we work.” Moving into different states means dealing with different climates and different species, which can be a challenge in itself. Kitty and Xerces are continuing to push forward to expand to many more farms and cities.

To learn more about Xerces and the work Kitty does, please visit: https://xerces.org/pollinator-conservation/